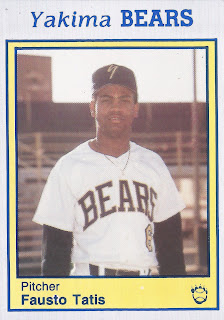 The High Desert Mavericks tried to mount a comeback in April 1991, but Bakersfield's Fausto Tatis came on to shut the door, according to The San Bernardino County Sun.

Down 6-2 in the ninth, High Desert scored twice, The Sun wrote. Then came Tatis. He induced a strikeout and ended the game.

Tatis got that strikeout in his third season as a pro. That season also marked his last season. He made high-A, but didn't make it higher.

Tatis' career began in 1989, signed as a free agent by the Dodgers out of his native Dominican Republic.

Tatis started with the Dodgers in the rookie Gulf Coast League. He went 3-3, with a 2.54 ERA over 11 outings, nine starts.

He then moved to high-A Bakersfield and short-season Yakima for 1990. He went 3-3 at Bakersfield, with a 5.97 ERA, and 1-4, with a 4.48 ERA over 13 starts at Yakima. He picked up one of his losses in an August game for Yakima, going four innings and giving up four runs.