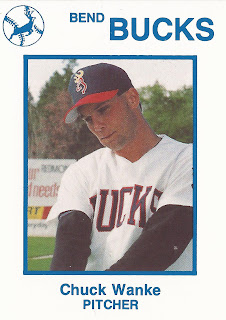 Chuck Wanke started slow for short-season Bend in 1990 and picked up a tough-luck loss in his third outing, The Bend Bulletin wrote.

Wanke went seven innings and allowed just four hits and an unearned run in the 1-0 defeat, The Bulletin wrote.

"It's disappointing to lose," Wanke told The Bulletin afterward, "but not as disappointing as you might think. I knew I was a better pitcher than I'd been throwing, but there's always that doubt. The big thing tonight is that I proved it ... to myself."

Wanke proved it enough in that first year as a pro to continue on. He later tried to prove himself after a breach of team rules. By the time his career concluded, he'd seen time in eight pro seasons. He made AA, but not the majors.

Wanke's career began that year in 1990, signed by the Giants as an undrafted free agent out of Beaverton, Ore.

Wanke played 1993 at high-A San Jose. He then returned to start 1994, but, already on the brink, the team found him with two women in his room. He got his release, according to The San Francisco Chronicle. He played the year instead at independent Sioux Falls.

For 1995, Wanke returned to the Giants as a replacement player. He also spoke to The Chronicle about redeeming himself after his 1994 exit.

"Anytime you get a second chance," Wanke told The Chronicle, "if you have half a brain, you're going to appreciate it. You don't get them very often."