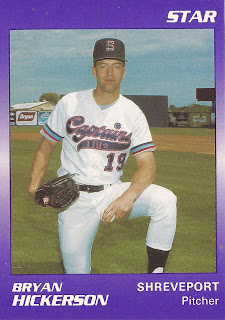 Bryan Hickerson normally pitched in relief. On this night in August 1991, he showed his Giants he could start,  as well, according to The Associated Press.

Hickerson went seven innings without giving up a run, The AP wrote.

"You can't pitch much better than that," Giants manager Roger Craig told The AP afterward of Hickerson. "He was filling in because we needed a starter, and look what he did."

Hickerson first made the majors earlier that year. He went on to see the majors in four more campaigns. In all, he saw time in 209 major league games, starting 36 of them.

Hickerson's career began in 1986, taken by the Twins in the seventh round of the draft out of the University of Minnesota.

He moved to the Giants system and single-A Clinton and AA Shreveport for 1987 in the Dan Gladden trade.

He missed 1988, but came back in 1989 at single-A San Jose. After going through Shreveport and AAA Phoenix in 1990, he returned to both in 1991. He also debuted in San Francisco that July.

Hickerson went 2-2 for the Giants over 17 outings, six starts. He then returned to San Francisco for 1992, getting into 61 games, 60 of those outings in relief.

That August, Hickerson gave up a home run to opposing pitcher Dwight Gooden after coming in early in relief. Hickerson also took the loss.

The Cubs took Hickerson off waivers for 1995 and he went to the Rockies mid-season in a trade. Between them, he got into 56 games in relief, with an 8.57 ERA, ending his pro career.

Hickerson then started a brief coaching career. He coached 1997 at high-A Bakersfield and 1998 at high-A San Jose.

"He always wants the ball, which is good," Hickerson told The Los Angeles Times. "But he wants to do everything quickly, and I mean everything. He has good stuff. When he slows himself down, he can have great stuff."