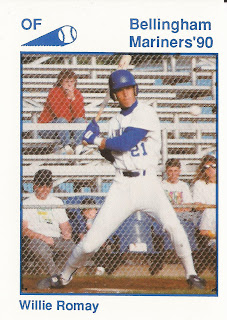 Stats are important for a scout, Willie Romay told BrowardHighSchoolBaseball.com in 2012. But they aren't everything.

In fact, some of the players the scout for the Major League Baseball Scouting Bureau liked then had bad stats, he told the site.

Years earlier, Romay found himself as the one scouted. And the Mariners liked him enough to take him in the fifth round of the draft. Romay played in five pro seasons. He never made the goal of the majors.

Romay, however, has since gone on to a long career as a scout, finding those players who could make the bigs.

Romay's career as a player began in 1989, taken by the Mariners out of Miami Senior High School.

Romay's own high school resume included work on defense. He won the Mr. Defense Award as both a junior and senior, according to his Bellingham card.

Romay played 1992 with the Dodgers between high-A Bakersfield and Vero Beach. He hit .205 over 55 games. After a season off, Romay played one final season with the Marlins in 1994 at high-A Brevard County. He hit .230 over 43 games to end his career.