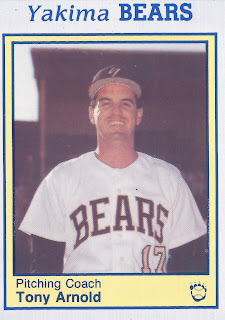 Tony Arnold advanced through the Orioles system to the point in August 1986 when the club believed him ready to debut in Baltimore.

Arnold reflected on his success to that point - and its origins - to The Baltimore Sun.

"I never threw hard," Arnold told The Sun. "I was lucky enough to have coaches, even in Little League, who stressed throwing strikes, and let the defense work."

Arnold's coaches got him to see two seasons in the bigs, a total of 38 major league appearances. He has since gone on to a successful coaching career, one where others had the chance to cite his work as getting them to the bigs.

Arnold's career began in 1981, taken by the Orioles in the 10th round of the draft out of the University of Texas.

Arnold started between rookie Bluefield and single-A Miami. He made AA Charlotte in 1982 and AAA Rochester first in 1983. He stayed between Charlotte and Rochester into 1986, when he got his shot at Baltimore.

Arnold started his full-time coaching career with the Dodgers in 1990 at short-season Yakima. He later joined the Indians in 1994 at short-season Watertown. He's been with the Cleveland system since.

In 1995, he served as pitching coach at single-A Kinston and worked with young starter Roland De La Maza, who Arnold saw as turning reliever, he told The Los Angeles Times.

"When you're not a guy who goes out and throws 90 and blows people away . . . you're better off to try all the roles," Arnold told The Times, "because eventually at some time in your career you are going to go into the bullpen."

Arnold made it up to AA Akron in  1997 and he's coached there in at least eight seasons. He's also coached a season at AAA Columbus, in 2014.

In June 2017, the Indians tasked Arnold with getting major league starter Danny Salazar back on track as they sent Salazar to Arnold at AA Akron. Arnold had coached Salazar previously.