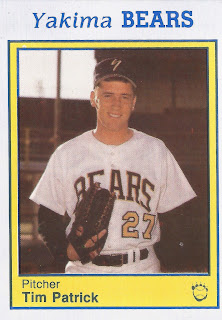 Yakima starter Tim Patrick had a rough start in this August 1990 game, according to The Bend Bulletin.

Patrick went six innings and gave up five earned runs. He struck out three and walked one and took the 6-5 loss, The Bulletin wrote.

Patrick took that loss in his second pro season. He went on to see one more. He never made AA.

Patrick's career began in 1989, taken by the Dodgers in the 29th round of the draft out of Sacramento City College. He went to Sacramento out of El Dorado High School in Placerville, Ca.

Patrick started with the Dodgers in the rookie Gulf Coast League and at single-A Vero Beach. He saw seven games, two starts in the GCL and two starts at Vero Beach. Overall, he went 4-2, with a 1.96 ERA.