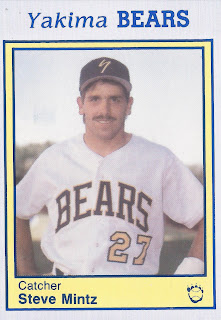 Shreveport Captain reliever Steve Mintz went the distance and then some in this April 1994 game, according to The Tulsa World.

In a game that went on five hours and 14 innings, Mintz pitched the final six innings and picked up the win, The World wrote.

Mintz did the job that year in Shreveport. He later did the job in the bigs over two seasons then as a coach and manager in the minors - and in Australia - after his playing days were through.

Mintz' career in baseball began in 1990, taken by the Dodgers in the 17th round of the draft out of Mount Olive College.

After going through the Red Sox system and AA New Britain in 1993, he arrived with the Giants for 1994. He played that year between AA Shreveport and AAA Phoenix. In 1995, he made San Francisco.

He played 1997 at AAA for the Padres and 1998 at AAA with the Pirates. He then returned for one final look at the bigs in 1999 with the Angels. He got into three games and gave up two earned in five innings of work.

Mintz continued playing in the minors for two more seasons, ending in 2001 at AAA Salt Lake with the Angels.

Mintz then started his post-playing career as a coach and manager. He started as a pitching coach with the Twins in the rookie Gulf Coast League. He spent four seasons in that role. He served as pitching coach at AA New Britain in 2008.

He coached at high-A Fort Myers in 2012. That July, he told his hometown Wilmington Star News how fortunate he was.

"I can't complain about my career and job," Mintz told The Star News. "I have a job doing something I have always loved doing my whole life. I guess everybody can't say that."

In 2016, he tried his hand at managing at single-A Hickory in the Rangers system. The previous off-season, he went to Australia and managed the Adelaide Bite.