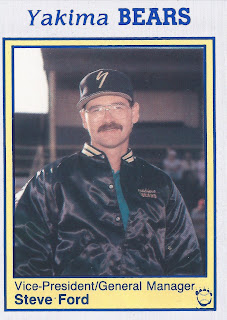 "He hits the ball very hard and goes with the pitch," Ford told The Post-Gazette, "which is something we usually have a hard time teaching the younger players. He is a terrific line drive hitter. Garrett's defensive play is sound, too, but he still has to work on learning some of the Dodgers' way of doing things."

Ford knew the Dodger way well. That season marked his 13th in the Dodgers system working in front office roles. He served as general manager at Salem that year in 1989 and followed the Dodgers to short-season Yakima in 1990. He served much of that time at AA San Antonio.

Ford's career in minor league baseball began after he graduated from Arizona's John Brown University, where he earned a degree in physical education, according to his Yakima card.

Ford started with the Dodgers by 1977, at San Antonio. In 1989, he served as the club's assistant general manager as Fernando Valenzuela played for the team. Ford told a book author about trying to get the Spanish-speaking Valenzuela to sign his first check without an interpreter.

Ford continued with San Antonio through 1987. He moved to short-season Salem for 1988 and returned there for 1989.

In September 1989, Ford speculated about changes in the Northwest League landscape in 1990. Boise and it's new field was an attractive spot for a team, he told The Salem Statesman Journal.

"That's the key," Ford told The Statesman Journal about the new facility. "There has been a lot of concern because of the travel from Boise, but that factor can take care of a lot of problems."