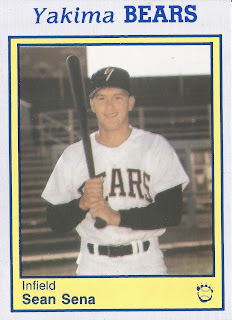 Sent to the plate in the ninth inning, Sean Sena tried to put his Yakima Bears team in the position to win in this August 1990. He ended up getting his team to within a run, according to The Spokane Spokesman-Review.

The pinch-hitter Sena did so by hitting his first professional home run, The Spokesman-Review wrote.

Sena picked up that home run toward the end of his second professional season. That home run also ended up being his only professional home run. Sena's career ended after just those two seasons.

Sena's career began in 1989, signed by the Dodgers as an undrafted free agent. He played his high school ball in Gresham, Ore. It is unclear if he played in college, none is listed.

Sena started with the Dodgers as a 21-year-old in the rookie Gulf Coast League. He got into 38 games and hit .183.