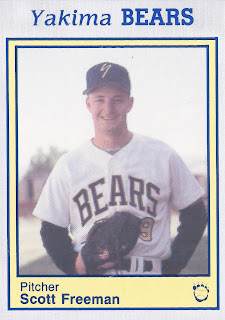 Looking back on University of Wyoming baseball, former head coach Bill Kinneberg recalled his 1990 team and Scott Freeman, according to The Casper Star-Tribune.

Freeman led the club's pitching staff to help the club to a school record 37 wins, The Star-Tribune wrote. Along the way, Freeman won all-conference honors that year and the year before.

Freeman went on from Wyoming to play as a pro. He saw four seasons. He never saw AA.

Freeman's pro career began that year, taken by the Dodgers in the second round of the draft out of Wyoming.

Freeman started with the Dodgers at short-season Yakima. He went 2-7 over 14 starts. He posted a 4.00 ERA and threw one complete game.