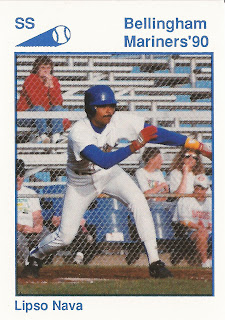 Lipso Nava's pro career began in 1990 and didn't end until his body told him to end, he recalled later to The Richmond Times-Dispatch.

In between, Nava played 16 years as a pro, not seeing in his final contest until 2006.

"I lost just enough bat speed to get me exposed to pitchers," Nava told The Times-Dispatch in 2017. "And obviously my legs, they started giving up on me. It wasn't the same to play back-to-back games."

Nava, however, played those seasons entirely in the minors, independent ball and Mexico. He made AAA, but he never made the majors.

Nava has since gone on to another long career, one as a coach. He spent the 2017 season as hitting coach at AA Richmond.

Nava's pro career began in 1990, taken by the Mariners in the 14th round of the draft out of Miami-Dade College. He grew up in Venezuela and played on the Venezuelan National Team.

Nava spoke to The San Bernardino County Sun later about coming to the United States and focusing on baseball.

"The first three months were very difficult," Nava told The Sun in 1991. "My coach there taught me to separate baseball from the other things."

Nava played his first season as a pro between short-season Bellingham and high-A San Bernardino. The infielder saw 53 games in all and hit .242.

He returned to San Bernardino for all of 1991. He hit .281 in 86 games there. He moved to high-A Peninsula for 1992, then AA Jacksonville for 1993. He played his last season with the Mariners in 1994 between Jacksonville and high-A Riverside.

After a season at independent Rio Grande Valley, Nava returned for one final season in affiliated ball. He played 1997 at AAA Iowa with the Cubs. He hit .266 in 109 games.

Nava started his coaching career at Newark in 2007. He then moved to single-A Augusta. In 2011, he moved to the Augusta manager's office.

To The Augusta Chronicle after he took the helm, Nava pointed to his seasons as a coach as preparing him to be manager.