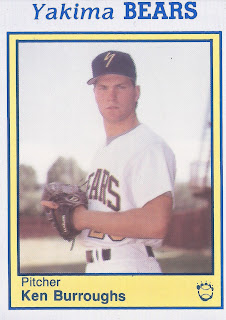 Ken Burroughs' career in baseball started as a player, but it has continued in coaching.

After his four seasons in the White Sox and Dodgers systems, Burroughs turned to coaching. He coached in high school and college. He then turned to instruction, serving as owner of the Tampa Bay Baseball Academy in Florida, according to his bio.

Burroughs started in baseball in 1987, taken by the White Sox in the 11th round of the draft out of Northeast High School in St. Petersburg. He's also credited as Kenny Burroughs.

The White Sox assigned Burroughs to the rookie Gulf Coast League. The pitcher got into seven games, all in relief. He gave up four earned in nine innings of work.

He returned to the GCL for 1988. In 17 relief appearances that year, he again gave up four earned, but in 21 innings of work.

For 1989, he made the move to short-season Utica. He got into nine games, five of them starts. His ERA totaled 7.45, marking his last time with the White Sox.

He played one more season with the Dodgers at short-season Yakima. In 12 relief appearances, he ended with a 9.64 ERA to end his career.