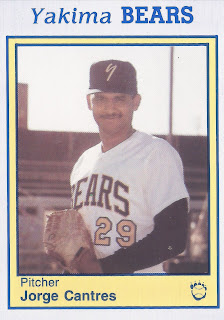 Yakima needed a hold in this August 1990 game, but Jorge Candres couldn't deliver, according to The Spokane Spokesman-Review.

Already down 4-2 to Spokane, Cantres gave up a lead-off triple in the eighth inning. The runner then came around to score. Cantres picked up five outs in the game and gave up that one earned run, The Spokesman-Review wrote.

Cantres gave up that run in his third professional season. He also gave it up in his last. He played just those three seasons. He never made single-A.

Cantres' career began in 1988, signed by the Dodgers as an undrafted free agent out of his native Puerto Rico.

Cantres started with the Dodgers in the rookie Gulf Coast League. He went 4-2 in 1988, with a 2.70 ERA over 12 outings, seven starts. He also recorded a save.

He returned to the GCL for 1989. In 15 all-relief outings, Cantres picked up five wins to two losses. He also recorded a 2.83 ERA and two saves.