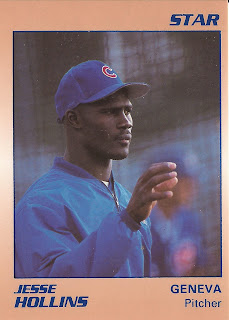 Jessie Hollins tried to explain his situation to The Orlando Sentinel in 1994.

He he was 12 months out from rotator cuff surgery. He hadn't pitched in a game since 1992, the year he'd made the majors his one and only time.

"I was one of the hottest pitchers in baseball 'til I got hurt," Hollins told The Sentinel as he prepared to start his comeback. ''Since, my life has been put on hold. It nearly destroyed me when I got hurt."

Hollins later returned home to Texas. In 2009, a fishing accident claimed his life.

Hollins' career began in 1988, the Cubs taking the 6-foot, 3-inch hurler in the 40th round of the draft out of Willis High School and San Jacinto College in Texas.

In 1990, Hollins picked up 16 starts and six relief appearances between short-season Geneva and single-A Peoria. He went 10-3, with a 3.03 ERA on the year.

Hollins moved to high-A Winston-Salem for 1991, then AA Charlotte for 1992. At Charlotte, Hollins was a full-time reliever. In 63 outings, he posted a 3.20 ERA. He also saved 25 games and earned a September call-up to Chicago.

With the Cubs that September, Hollins got into four games in relief, giving up seven earned runs in just 4.2 innings of work. He gave up four of those runs in one inning of work against the Cardinals.

Then came Hollins' arm troubles. He missed all of 1993, undergoing the shoulder surgery that June. In 1994, he's credited with getting back to pitch for high-A Daytona. He gave up four earned runs in five innings of work.

He's credited with making another attempt in 1997, with the Yankees in rookie ball and in independent ball in Tyler. But it was brief. His career was over.

It was in July 2009 that Hollins went fishing with at least one of his sons and a brother. Hollins tried to help a boater with a struck line, according to Houston station KTRK. But Hollins got into trouble and drowned.


"My brother would walk into the room and suck the air out of it," Stacy Hollins told The Houston Chronicle after his brother's passing. "It was almost like the building would shake.

"But while he was very large," Stacy Hollins continued to The Chronicle, "he was very kindhearted. To be as big as he was, he was a gentle giant."
Posted by Steve78 at 11:08 PM