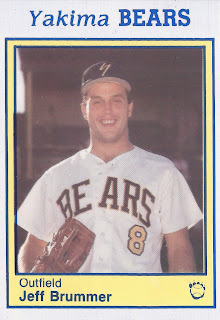 Among those losses the club had to overcome: The loss of Jeff Brummer to the Los Angeles Dodgers, The News wrote.

While Brummer moved on to the pros, his stay turned out to be brief. He played two seasons in the minors and one in Mexico, marking the extent of his career.

Brummer's pro career began that year in 1989, signed by the Dodgers as an undrafted free agent out of the University of Buffalo.

At Buffalo, Brummer remains in the school record in a speed category. He knocked six triples in 1987, still tied for fourth most in a season all-time at the school.

Brummer started with the Dodgers in 1989 in the rookie Gulf Coast League and at single-A Vero Beach. In 46 games at Vero Beach, he hit .306 and stole eight bases. He got into another eight games in the GCL.

Brummer moved to short-season Yakima for 1990. In 70 games there, he hit .270. He knocked three home runs, had 32 RBI and stole 33 bases. The season marked his second and last with the Dodgers. He then played 1991 in Mexico to end his career.