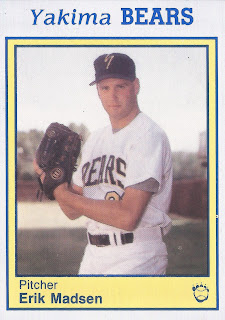 Erik Madsen showed marked improvement in 1988 for Notre Dame after seeing only limited time the year before, according to The Notre Dame Observer.

He also made the move from relieving to starting - and earned the title that year of most impressive team hurler, The Observer wrote.

"I just wanted to pitch," Madsen told The Observer of his improvement. "It's just getting mentally prepared from the start of the game. It makes me feel like I have more control of the game. It's pretty much my game to win or lose."

Madsen went on from Notre Dame the next year to the pros. He ultimately played two seasons there. He didn't make single-A.

Madsen's pro career began in 1989, signed by the Dodgers as an undrafted free agent out of Notre Dame.

At Notre Dame, Madsen remains in the record books for endurance. He started 15 games in 1988 and 17 in 1989, both top five at the school. He also won 10 games, tied for sixth all-time at Notre Dame.

Before an April 1989 start, Madsen's head coach Pat Murphy praised the right-hander to The Observer.