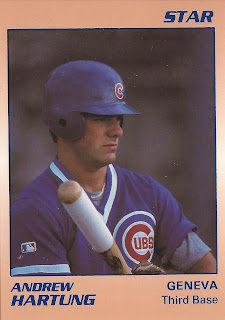 Andy Hartung got his first taste of AA in 1992, a two-game stint at Charlotte. He spent the next year trying to get back there, and beyond.

"It's funny. When I signed I was hoping to some day make it to AA," Hartung told The Orlando Sentinel in May 1993. "But you play a few years and you get to see some major-league pitchers on rehab and you start to realize you are not that far away."

For Hartung, though, he ended up being far enough away. In a pro career that spanned six seasons, those two games he played at AA in 1992 ended up being his only at that level with the Cubs. He never made the majors.

Hartung's pro career began in 1990, taken by the Cubs in the 30th round out of the University of Maine at Orono.

At Maine, Hartung picked up three hits in a game his freshman year, one where he had to leave with an injury. In 1990, Hartung put together an 18-game hitting streak, the 18th game coming in March.

"He's matured as a person and as a baseball player," Maine assistant coach Mike Coutts told The Bangor Daily News after Hartung's 18th game. "He's worked a lot harder than he has in the past and I think that's because of his maturity."

With the Cubs, Hartung started at short-season Geneva, hitting .331 in 74 games. He also hit 11 home runs and knocked in 70.

For 1992, he returned to Winston-Salem, hitting 23 home runs on the season, and earning that two-game promotion to Charlotte. In those two games, Hartung hit another home run, and picked up two other hits.

Hartung played out 1994 with independent Duluth-Superior. In 1995, Hartung played 12 games with the Rockies at AA New Haven, then the rest of the year between independent Winnipeg and Lubbock, ending his career.

Hartung has gone on to return to his home state of Massachusetts, teaching the game to younger players in AAU ball. Hartung has been listed as a hitting coach with the HR Falcons in Woburn, Ma.