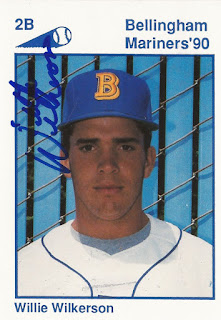 Willie Wilkerson returned to the field in 1995 and he did so for a team in his home state.

Wilkerson played 13 games for the independent Mobile Baysharks that year. He went 11 for 32.

He went on to play for another independent team that year - five seasons after his initial campaign as a pro. Those two seasons proved to be the extent of his career.

Wilkerson's pro career began in 1990, signed by the Mariners as an undrafted free agent out of Jefferson Davis Community College.

Wilkerson played his one season with the Mariners at short-season Bellingham. He got into 47 games and played mostly at second base. He hit .243, with 10 RBI and five stolen bases.

He didn't return for a second season with the Mariners. Instead, he returned for 1995.

He played briefly for Mobile and played out the year at independent Tennessee in the Big South League. He hit .305 at Tennessee, with four home runs and 26 RBI to end his career.