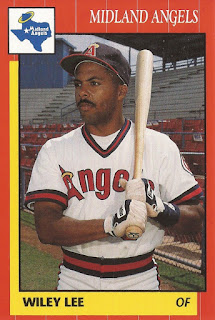 Lee coached Upton at Great Bridge High School in Virginia, helping guide him to the first overall selection in the 2005 draft out of Great Bridge.

"You only had to pull him back, but you never had to make him go," Lee recalled to USA Today. "If there was some top pitcher in the state or in the Tidewater area, he was more than willing to take a shot at that guy on the mound. He was very, very competitive."

Lee was competitive enough years earlier to see his own career in the pros. Lee played four seasons. He made AA, but not the majors. He has, however, since gone on to a career as a coach and instructor, helping players like Upton on to the pros.

Lee's career began in 1987, taken by the Angels in the fifth round of the draft out of Old Dominion.

At Old Dominion, Lee swiped 120 bases over his career and only got caught 12 times. He made the national team in 1986. He hit a home run against Japan.

Lee made single-A Palm Springs for 1989 and recorded 66 stolen bases over the year. He knocked in two runs on a hit in a July game, among his 57 total RBI that year.

Lee later started his coaching career. He returned home to Virginia and took the helm at Great Bridge in 1998. He stayed there through 2011, watching over Upton and 40 others who went on to play in college. He also won two state championships.

He then served as a coach at Norfolk State and works as an instructor in 2017 at Great Neck Baseball Academy in Virginia.

In 2011, he stepped down at Great Bridge following his second championship. His second baseman Hunter Higgerson told The Norfolk Virginian-Pilot what he meant to the school.