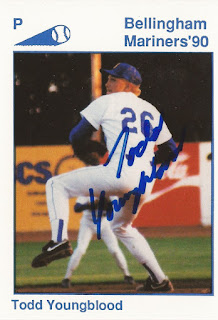 Todd Youngblood arrived with his new team in Alexandria for 1997 after playing the previous three seasons with rival Amarillo.

His new manager Stan Cliburn welcomed his newest addition, according to The Alexandria Town Talk.

"I thought Youngblood was the ace of the staff up there in Amarillo (in '95)," Cliburn told The Town Talk. "He's very aggressive, a bulldog type pitcher who goes after people."

Youngblood played that year for Alexandria in his eighth and final season as a pro. He never made it higher than high-A.

Youngblood's career started in 1990, taken by the Mariners in the 38th round of the draft out of Cochise College. He went to Cochise out of Farmington High School in New Mexico.

He then went to Cochise where he won second-team all-region1 and second-team all-conference in 1990. He then pitched Cochise to a win in a National Junior College World Series game by getting into the ninth.

Youngblood started with the Mariners at short-season Bellingham. He went 0-3 over 17 relief outings, with a 7.71 ERA.

He returned to Bellingham and saw time at high-A San Bernardino for 1991. He hit a batter in a May game for San Bernardino. He went 6-5, with a 3.22 ERA overall.