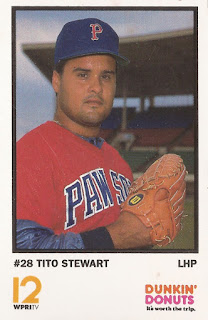 Not making it to the majors was always a thought in the back of Tito Stewart's mind, he admitted to a reporter for The Christian Science Monitor in 1986.

"But every time I pitch well, it's a step closer to the majors," Stewart told The Monitor. ""I tell you - It will be a great experience for me the day I walk into Fenway Park."

Stewart may have walked into Fenway, but he didn't do it as a player there, or in any other major league park. Stewart played professionally for nine seasons, never making the majors.

Stewart, also known as Hector Stewart, started professionally in 1983 with short-season Elmira, signed by the Red Sox as a free agent. He went 6-5 with a 4.03 ERA that year.

Stewart got his fifth save by educing a game-ending double play in a May game. One of Stewart's 1987 losses came in a June game, giving up a two-run shot in the 12th inning

"He (Stewart) was throwing some nasty pitches," Darnell Coles, who hit the home run, told The Toledo Blade afterward. "I was just looking for something to hit hard, not necessarily a home run."

Stewart returned to AA New Britain for 1988, throwing a 4.23 ERA in 50 appearances. It was enough to be called one of the team's top lefties. But he wasn't considered a top prospect, according to the Associated Press.

It was AA New Britain for Stewart again for 1989 and back to Pawtucket in 1990, his final year with the Red Sox system. Brief stays with the Expos and Padres systems and Stewart's playing days were done, never making it to the majors.