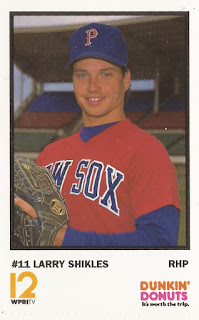 Larry Shikles hung a slider to a Clearwater Phillie the Phillie hit it out, Shikles explained to The Lakeland Ledger after that April 1987 game.

After that, Shikles saw a change in his approach, though he still recorded the win, he told The Ledger.

"After the home run," Shikles told The Ledger, "I started to try to over-throw and I started to get behind and used my fast ball more. Earlier, when I was ahead of a hitter, I used my slider and curve more."

Shikles was in his second season using his different pitches as a pro. He went on to use his fast ball, slider and curve in a total of eight seasons. But he never did get to use them in the majors.

Shikles' career began in 1986, signed by the Red Sox as an undrafted free agent out of Western Kentucky University.

For 1988, Shikles made AA New Britain, splitting time between starting and relieving and keeping his ERA below 4 at 3.53.

He then returned to New Britain for 1989, getting a one-game look that year at AAA Pawtucket.

Shikles then played his next three seasons at Pawtucket, going from starting to relieving his first two seasons, then returning to mostly start in 1992. In April 1991, Shikles came into a game in relief and set down 11-straight batters in a Pawtucket win.

"I felt like I really had a strong season," Shikles told The Bowling Green Daily News after becoming a free agent. "The only thing I didn't accomplish is making the big leagues."

Shikles then tried his hand in the Athletics organization. But the results were the same. He spent the year at AAA Tacoma, starting 21 games and relieving in 17. But he didn't see Oakland.

Shikles then left the game, becoming a financial consultant in his native Missouri, where he remained for 2012.