John Trautwein, Competitor In Him - 30 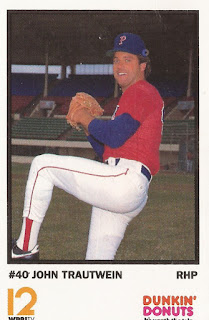 When John Trautwein graduated from Northwestern, he had a job already lined up at a chemical company, The Palm Beach Post wrote in 1986.

But that had to wait, Trautwein needed to give baseball a try.

"It's great to have a degree," Trautwein told The Post that May. "I figure when I'm 30 if I didn't give baseball a shot, I'd be sorry."

Trautwein did give baseball a try, just like his father Jack before him and his brother Dave after him. Of the three, John Trautwein was the only one to make the majors, pitching in a total of nine major-league games.

While baseball has been a family pursuit for the Trautweins, a family tragedy in October 2010 is fueling a new pursuit for John Trautwein, that of preventing teen suicide.

Trautwein's began his attempt at a baseball career in 1984 with independent rookie league Helena, playing well enough there, with a 3.28 ERA, to be signed by Montreal for 1985.

He played 1985 at single-A West Palm Beach, with a 2.16 ERA in 35 games. That June, he told the South Florida Sun Sentinel he sometimes traded minor league stories with his father.

"Every time I'd say something bad about what was happening in my career," Trautwein told The Sun Sentinel, "he'd come up with a story twice as worse. So you didn't feel alone or like you were the only person in the world with some problems."

Trautwein divided 1986 between West Palm Beach, Burlington and AA Jacksonville, posting an ERA of 4.36 between them.

He spent all of 1987 at the Expos AA team in Jacksonville. Then the Expos left him unprotected and the Red Sox took him in the minor league draft. That meant the Red Sox had to keep him in the majors, or offer him back to the Expos.

"I think I can do anything they want me to do," Trautwein told The Lakeland Ledger that spring about the Red Sox, "but the way this team is shaping up, I think middle relief is where I fit in."

Where Trautwein fit in best that year, however, was on the bench. He spent the year in the majors, but only got into nine games. At one point, he went 49 days without pitching. With a depleted bullpen, Trautwein pitched four outs, giving up one hit. "Today was day 49," Trautwein said in the clubhouse later, "the hostage is freed."

He also got another brief call-up to Boston that year, but never got into a game. Back at Pawtucket came the other highlight of his year, according to The Chicago Tribune. He got to pitch against his brother Dave Trautwein, a member of AAA Tidewater. John won the duel.

"I wouldn't trade my years in the minors for anything in the world," John Trautwein told The Tribune. "It was the greatest experience I've ever had-good or bad. I enjoyed every minute of it. I just decided after seven years, if I wasn't going to play in the big leagues, it was time to go on with my life."

Trautwein's family tragedy came in October 2010. His 15-year-old son committed suicide. He and his wife are now working to help keep other families from going through the same tragedy they went through, starting The Will To Live Foundation in Will's memory.

"We found him Friday morning," Trautwein told The Boston Globe in February 2011, "and on Saturday I was asking people to write a check for his foundation, and the next week I was talking to groups of kids. The competitor in me doesn't like losing, so in some ways, Will is motivating me now. People are starving for this message."