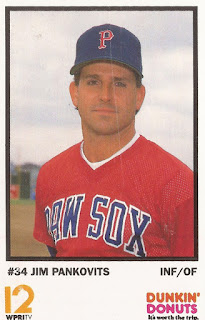 Jim Pankovits had waited nine seasons for this. He'd been taken by the Astros in the fourth round of the 1976 draft, made AAA by 1979. But it took until May 1984 until Pankovits finally got the call to the bigs.

Now, after his first seven games, Pankovits had Astros fans wondering why he hadn't been called up sooner.


''This is fun," Pankovits told The New York Times that June, after that initial stretch where he hit .364. "Getting hits in the major leagues is a real pleasure, especially after getting so many in the minors. I've been playing well for four years on the Triple A level at Tucson and Hawaii, waiting for my chance at Houston.''

Pankovits played in 53 games for the Astros that year, hitting .284 with 14 RBIs. He would be a regular with the Astros for five seasons. And he's still a regular for the team today, as a long-time manager and coordinator in the Houston minor league system.

Pankovits, a native of Virginia, started his professional career in his home state, at short-season Covington. He made it to AA Columbus in 1978, then had a short stint at AAA Charleston that year and the next. It was in 1980 that Pankovits settled in at AAA - for four seasons.

In July 1978, for AA Columbus, Pankovits' two-run triple provided the offense in a Columbus no-hitter.

He finally got his call-up that May in 1984. His early success included a hit in his first at-bat. By August, Pankovits' Astros were on a role. They almost made it back to .500.

The team was looking for ways to win, Pankovits told The Pittsburgh Press.

"People just don't know how mental baseball is," Pankovits told The Press. "When you have a positive attitude, like we have now, good things happen to you."

Arguably Pankovits' best year was one of Houston's best years. In 1986, Pankovits played in 70 games and hit .283. In one August game, Pankovits not only had four singles in five at-bats, but he also did his work elsewhere, making the defensive play of the game.

His last year with the Astros as a player was 1988. After spending time with the Pirates and Dodgers systems in 1989, Pankovits signed on with the Red Sox in 1990, starting the year at AAA Pawtucket. He got one last call-up that summer. He played in two games, without getting an at-bat.

Another year at Pawtucket in 1991 and Pankovits' playing days were done. But his time with the Red Sox earned him another job the next year, as manager for their AA team in New Britain. He stayed there for three seasons, then rejoined the Astros as manager at single-A Quad City in Davenport, Ia.

After time away from managing, as a coordinator in the Astros system, Pankovits returned as a manager in 2006, with the single-A Salem Avalanche. He served his second season as the skipper of the short-season Tri-City ValleyCats in Troy, NY, in 2010. In 2017, he served as a coach for the high-A Modesto Nuts.

But, speaking to The Roanoke Times on his return to managing in 2006, Pankovits said he'd changed his style from his earlier time as manager. He recalled himself being "sometimes on the fiery side. Sometimes to the fault."

"I'm anxious to see how that's going to shake out," he told The Roanoke Times. "I've mellowed a bit. I'll be a little more lenient on the umpires. That comes with maturity. Hopefully I'll pick my spots."
Posted by Steve78 at 9:33 PM