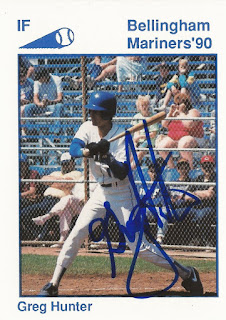 Greg Hunter described his job as director of minor league operations with the Mariners in 2006 to The Seattle Times as moving players, equipment and meeting with the media.

But the best part of his job, he told The Times, involved the players themselves.

"I enjoy watching players develop," Hunter told The Times, "and the more I get to do that, the more I enjoy it."

Hunter developed in the minors himself years earlier. He spent a total of four seasons on the field and developed enough to briefly make AA twice. He never made the majors.

Hunter's playing career began in 1990, taken by the Mariners in the 23rd round of the draft out of Washington State University. He went to Washington State out of Juanita High School in Kirkland, Wash.

Before hitting Juanita High, Hunter and his Kirkland team of Little Leaguers made the 1980 Little League World Series and came in third.

At Washington State, he knocked in 153 runs over his career and scored 189 himself. He also knocked 263 hits, all top-ten all-time at the school.

With the Mariners, Hunter started at short-season Bellingham. He hit .213 over 56 games. He then moved to high-A San Bernardino for 1991. He hit .242 on the year with two home runs.

He hit his second home run of 1991 in August off an old Washington State teammate, The San Bernardino County Sun.

"I was blowing all the way down the first-base line, trying to get that thing out of here," Hunter told The Sun after that game. "He's gotten me out a lot more than I've hit him."

Hunter played at high-A Peninsula and San Bernardino in 1992 and got a brief look at AA Jacksonville. He hit .209 in 14 games at AA. After skipping 1993 and 1994, Hunter returned for six final games in 1995 at AA Hardware City with the Twins.

In October 2008, Hunter talked up the benefits of winter ball in Venezuela to MLB.com.

Venezuela provides "better preparation for the Major Leagues, in the sense there is more of an urgency to win," Hunter told MLB.com. "The whole experience of going down there and playing in front of between 15,000 and 20,000 almost every game is different than anywhere else they can go."