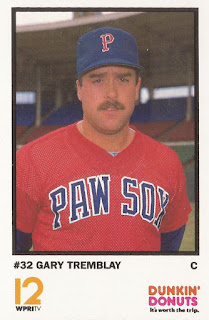 The pitches came in wild, but Gary Tremblay blocked them.

"Tremblay showed everyone how to catch a little," Red Sox manager Joe Morgan told The Associated Press afterward. "He caught one inning just about as well as anyone can."

Despite impressing his manager in that March game, Tremblay didn't make Boston that year or any year. In a nine-season professional career, eight of those in the Red Sox organization, Tremblay never got called up to the bigs.

Tremblay's career began back in 1983, taken by the Red Sox in the sixth round out of Costal Carolina University. He played that first year at short-season Elmira. He hit just .162, an average that would become the norm for the catcher.

He played in the Florida Instructional League that fall, helping his team beat one from Japan with a three-run home run. He split the next year between single-A Winter Haven and AA New Britain. Between them, he hit .175.

In spring 1987, Tremblay got a run-scoring single, his first hit in a big-league spring training, The Associated Press wrote. Tremblay returned to New Britain for 1987, where he hit .207 on the year. He also got seven games at Pawtucket. He would play at Pawtucket each of the next three seasons, never hitting higher than .210.

In 1988, Tremblay hit .204 in 74 games, along with eight home runs. He hit a three-run home run in a May game. In August, he hit a seventh-inning, lead-off home run, the difference in a 1-0 Pawtucket victory.

Back in spring training 1989, Tremblay's manager Morgan remarked on that catching performance to The Patriot Ledger Sports Service. He also remarked on what likely kept Tremblay from making the majors, his hitting.

"He's quite a good catcher," Morgan told the sports service. "If he could hit a little, he'd be a very good major-league catcher. Just what we want."