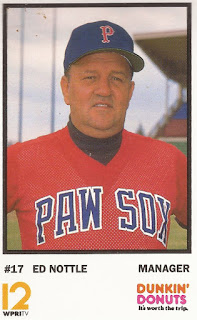 Speaking to a group of young baseball players in spring 2008, Ed Nottle promoted his new team the Ottawa Rapidz. But he was also promoting the game itself, a game he had played or coached for nearly a half a century.

"Baseball is enthusiasm," Nottle told the children at the baseball clinic, a video of his talk posted on YouTube. "Baseball is love for the game. Baseball is caring about the game."

Nottle has been promoting the game in his own way, now going into his sixth decade. He's done it playing and persevering for years in the bush leagues, without playing a game in the majors.

He's done it in since the early 1970s as both a coach and a manager, all but one season in the minors and each year since 1993 in independent leagues. Along the way, Nottle ingratiated himself in with the minor league cities he managed in.

That one season not in the minors was spent as a bullpen coach for the Oakland Athletics in 1983.

He's also done it in other, more unconventional ways. He's earned the title of the "singing manager" for forays into night clubs and singing at charity events and even putting out a record titled "To Baseball With Love."

His story has become so ingrained with the story of baseball and the minor leagues that a production company is shopping a bio-pic on his life: "In a game played by the rules, one man plays by his own," the tagline reads.

Nottle's career in baseball began in 1959, when he was signed by the White Sox out of the Army. He spent nearly two decades pitching in the minors, including one call-up without a pitching appearance.

The last several years he served the dual role as a coach and as a player, including 1974 at single-A Gastonia. His first managing job came in 1978 in the Oakland system, at short-season Bend. Nottle was working with young players. In one late July game, that work didn't show too well. Nottle's Bend team made six errors.

"I hate games like this," Nottle told The Eugene Register-Guard after the game. "You can't learn anything when you're booting the ball."

His work managing in the minors was getting noticed. The top club considered him for the top job in Oakland, before he became the bullpen coach.

He returned to Tacoma for 1984, jumping to the Red Sox for 1985. He hit AAA Pawtucket in 1986, where he would stay through 1990. In between, he managed in the winter Senior Professional Baseball Association.

He also got consideration again for the top job, in July 1988 with Boston. The job went to Joe Morgan.

"Joe was supposed to be the interim manager but then he went on the winning streak," Nottle recalled later to The Gatehouse News Service. "Joe asked me to be on his staff and I should have taken it."

"Ed is someone I would call a friend and someone I truly admire for his hard work and dedication to the entire Siouxland community and to the game of baseball," Explorers GM Shane Tritz told OurSportsCentral.com upon Nottle's return in 2006.

Between his stints in Sioux City, Nottle managed one season at Duluth, then the other four at Brockton, winning the 2003 Northeast League championship.
Nottle joined Ottawa for 2008, but his stop there was short. A poor performance on the field led to him being let go mid-year. But he stayed on long enough to return to Brockton, another city where Nottle left a popular man. Brockton even honored him with a bobblehead night.