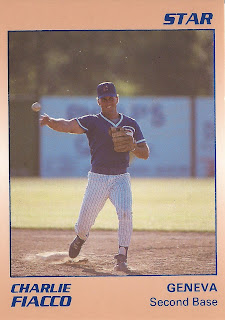 Charlie Fiacco hadn't played in 11 months, injured in a home plate collision the previous spring in college, according to The Oxnard Press-Courier.

Fiacco, though, felt he was back and, in March 1990, he was a pro, signing his first pro contract with the Cubs, The Press-Courier wrote.

"I'm ready to go," Fiacco told The Press-Courier. "I just want to see what I can do, more than anything else. I've been hitting the last six months, so I don't feel I'm that much out of it. I've run the last two months, so I'll be in good shape going in there."

Whatever shape Fiacco was in, it apparently wasn't good enough to earn him a long pro career. He ended up that summer at short-season Geneva, playing his only season of pro ball.

Fiacco's career started that year, signing with the Cubs out of UCLA. The Cubs had taken him the previous June in the 36th round of the draft. Fiacco went to UCLA out of Camarillo High School in Camarillo, Ca.

At Camarillo, Fiacco was used as both a third baseman and as a pitcher, helping his team to the sectional championship game. "He's meant just about everything to us," Fiacco's high school coach Ken Wagner told The Los Angeles Times in May 1985.

Fiacco went to UCLA on a full scholarship, coaches there impressed with both his speed and his power, according to The Press-Courier.

"Fiacco is one of the best athletes in the Southern California area," UCLA pitching coach Guy Hansen told The Press-Courier. "He runs a 6.5 or 6.6 60 - which is outstanding speed. And he has power. He'll end up hitting home runs wherever he plays."

At UCLA, Fiacco hit two home runs in one March 1989 game. That June, Fiacco found himself selected by the Cubs.

With the Cubs at Geneva in 1990, Fiacco got into 60 games, getting time at second, third and in the outfield. He ended up hitting .251, with four home runs and 25 RBIs. It was his only season as a pro.

Fiacco has gone on to return to his old high school as a coach and math teacher, according to a UCLA media guide, coaching his team to seven league championships.