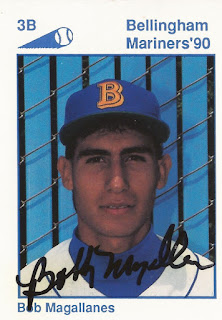 Birmingham Barons manager Bobby Magallanes got his reliever Hector Santiago on the phone in June 2011 with a question on whether Santiago could go that night out of the bullpen, according to The Newark Star-Ledger.

The reason Magallanes asked had Santiago asking if it was a joke, The Star-Ledger wrote: Santiago was going to the majors.

Magallanes, though, never got his own call to the majors. He played in Mexico and in high-A ball, but he didn't get higher.

Magallanes' career began in 1989, taken by the Mariners in the 50th round of the draft out of Cerritos College in California. Magallanes is sometimes referred to as Bob Magallanes. He is also the brother of Ever Magallanes.

Magallanes waited to join the Mariners. Instead, he played summer 1989 with Team USA.

Magallanes first played for the Mariners in 1990. He spent his first year between high-A San Bernardino and short-season Bellingham.

He then split 1991 between San Bernardino and high-A Peninsula. He hit .216 on the year. He struggled that August, but still put up some extra-base hits, according to The Newport News Daily Press.

"When you're not hitting for average, a lot of people tend to be passive at the plate," Magallanes told The Daily Press. "I try to stay aggressive."

Magallanes returned to Peninsula for 1992, but it was his final season in affiliated ball.

He returned in 1995 and played in the independent Texas-Louisiana League. He then played much of the next six years in Mexico to round out his professional playing career.

By 2002, Magallanes had started his coaching career, joining the Angels system. He served as hitting coach in rookie ball and as a scout for his first two years.

He got his first managerial job in 2004 at single-A Cedar Rapids. He stayed there for three seasons, then managed at AA Arkansas for four. He managed at Birmingham in 2011 and 2012, then rookie Bristol in 2013.

In 2009, Magallanes credited his Travelers for coming back from a 4-0 deficit in the eighth inning with a six-run outburst, according to MiLB.com.