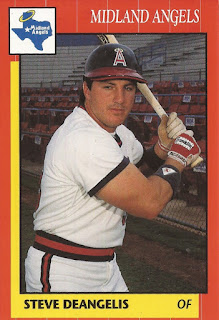 Steve DeAngelis played well enough at AAA in 1986 - just his second season as a pro - for Phillies brass to consider him for a September call-up, according to The Los Angeles Times.

The team didn't have room. The team also had to consider bringing DeAngelis up might expose him to being selected by other teams in the offseason, The Times wrote.

"I think it stinks," DeAngelis told The Times of his reaction to the reasoning. "If a guy's ready to go up and play, they should bring him up."

That September, though, might have been DeAngelis' best shot. He went on play professionally in nine campaigns, see time at AAA in four of those, but he never made the majors.

DeAngelis' career began in 1985, taken by the Phillies in the second round of the January draft out of Saddleback College in California.

DeAngelis played his first season with the Phillies at single-A Clearwater. He hit .271 over 128 games with 16 home runs. He hit one of those home runs to tie a July game.

DeAngelis then played that 1986 season between AA Reading and AAA Portland. He hit .251 in 101 games at Portland, with 14 home runs. He knocked a two-run double in a May game.

He played most of 1987 and all of 1988 back at Reading. He then moved to the Angels system for 1989. DeAngelis arrived with the Angels after being released by the Philllies that spring.

"I've got a fresh start with an organization that is giving me a chance," DeAngelis told The Times. "I knew my career wasn't over."

DeAngelis saw time that year at single-A Quad City, AA Midland and AAA Edmonton, but not California. He then split 1990 between Midland and Edmonton.