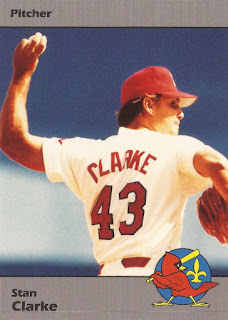 Stan Clarke picked up the win in relief for Seattle in this May 1987 game. It was a big win for Clarke, not just because his family was there to see it or because it was his first in the bigs in four years, according to The Associated Press.

It was a big win because he'd come back from a career-threatening shoulder injury, all the way back to notch that next win.

"When I blew my shoulder out (in 1984), I thought I'd never pitch again," Clarke told The AP. "To me, this is the finest, finest win that's ever come in my career."

Clarke's career began in 1981, taken by the Blue Jays in the sixth round of the draft, out of the University of Toledo.

Clarke started at rookie Medicine Hat, moving to single-A Florence and AA Knoxville in 1982. In 1983, he made AAA Syracuse. That June, he also made Toronto.

Clarke got into five games for the Blue Jays in June, picking up his first win in his second outing. That second outing consisted of two outs, a double play to end the 14th inning. He came back for five more outings in September, getting into 11 innings total on the year, giving up four earned runs.

Clarke worked that off-season to develop another pitch, according to his hometown Toledo Blade. His former coach at the University of Toledo, Stan Sanders, showed him a split-finger fastball. "I tried it and, boom, just like that, I was throwing it with a lot of accuracy," Clarke told The Blade in March 1984.

Clarke's 1984 season, though, consisted of 29 outings, five starts. Then he had his shoulder injury. Despite the injury, though, Clarke got into 43 games for Syracuse in 1985, starting 14. He also went 14-4 and made it back to Toronto in September.

After going through the Tigers system in 1988, playing at AAA in his hometown without a call-up to Detroit, Clarke moved to the Royals for 1989. He made it back to the majors or two outings with Kansas City that year, both starts.

In his first start May 30, Clarke went just one inning, giving up seven earned runs. In his second a week later, he went six innings, giving up five earned runs.

"Yeah, I'm discouraged," Clarke told The Lawrence Journal-World after that first start. "I was working too fast and had no breaking ball whatsoever. My curve ball was just flat."

Clarke returned to AAA Omaha after the second start, playing out the year there. He then came back to the majors for one final two-game stretch in September 1990 with the Cardinals, ending his big league career. His playing days ended the next season, back at AAA Louisville.