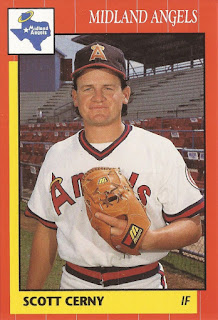 Scott Cerny hit his Midland Angels on to victory in this May 1990 game, not with a big blast,  but with what The Tulsa World described as a seeing-eye single.

Cerny assessed his eighth-inning game-winner afterward to The World.

Cerny took that hit in his fifth season as a pro. That season also marked his last as a pro. Cerny, however, has gone on to a post-playing career as a scout, taking young players and seeing the pros.

Cerny's career began in 1986, taken by the Angels in the 13th round of the draft out of UC-Santa Barbara.

At Santa Barbara, Cerny won all-american honors as a second baseman in 1986 and won league co-player of the year honors that same campaign. He remained in the top ten in five different categories and  won induction into the school's hall of fame.

He later served as a scout for the White Sox and Tigers. In 1999, he spoke to The Chicago Tribune about agent Scott Boras' tactics. Boras threatened the J.D. Drew route on a pick, not signing and entering the next year's draft.