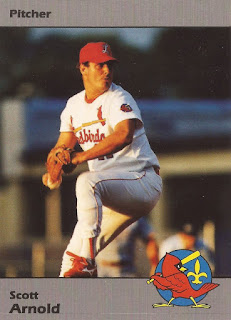 At the age of 44, Steve Carlton wanted one more year, looking to the Cardinals for an invitation to spring training in 1989. But the Cardinals declined - young pitchers like Scott Arnold needed a chance, the St. Louis general manager said, according to a wire account.

"The main reason, besides his age," Cardinals GM Dal Maxvill told a wire service, "is (that) to bring someone in at this point and give him a fair trial would involve letting him pitch 20 or 30 innings that Scott Arnold or Jeff Fassero or Cris Carpenter would be pitching. I don't think that's the proper way for us to go."

Arnold appeared in a total of six major league games in 1988, four years after being taken by the Cardinals in the fifth round of the 1984 draft.

He played that first year at rookie league Johnson City, posting a 3.05 ERA in 14 appearances. Arnold also got one appearance at single-A Springfield.

Arnold's second campaign was spent at single-A Savannah. Early on, he was called the "power pitcher" of the Savannah staff. He didn't disappoint, ending with a 3.30 ERA. Arnold also was named one of the South Atlantic League's players with the "best tools" by Baseball America.

His third, at single-A St. Petersburg, was even better with a 2.71 ERA, getting named to the Florida State League All-Star team. That year Arnold also got a five-game look at AA Arkansas before getting a full-year look at Arkansas for 1987.

Arnold went 12-9 for the Travelers in 1987, earning him a spot in the Cardinals' spring training for 1988. Arnold earned three saves that spring, his third coming off the Tigers.

Assigned to Louisville, Arnold didn't have to wait long for his call-up as Ken Dayley went down quickly. In 6.2 innings for the Cardinals that April, Arnold gave up four earned runs. Two of those earned runs came in a 6-1 Cardinals loss to the Cubs April 11.

Arnold spent the biggest part of the year, however, back at AA Arkansas, going 10-4. And, while he may have gotten his look in spring training 1989, Arnold spent that year at AAA Louisville, going 8-10.

One more year and 14 appearances between Arkansas and Louisville in 1990 and Arnold's career ended without getting back to the majors.