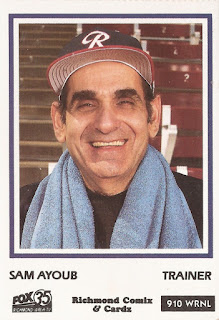 When Ralph Garr returned to Richmond in 2008, he was there to accept his induction into the International League Hall of Fame and see off the AAA Richmond franchise to Georgia.

He also expected to look up an old friend in longtime Richmond trainer Sam Ayoub, Garr told The Richmond Times-Dispatch.

"Sam Ayoub was one of the nicest human beings I've met," Garr told The Times-Dispatch. "They don't get no better. I plan on giving him a call."

A native of Smithville, Tenn., Ayoub started as a trainer in the Braves system in the early 1960s. His 30th season came in 1990. That year also marked his 21st in Richmond.

Over that time, Ayoub oversaw the physical ailments of countless Braves farmhands and future Braves major leaguers, including Dale Murphy.

By the time his career in Richmond was over, Ayoub had become an institution. Author Ron Pomfrey, in the acknowledgements for his book "Baseball in Richmond," included Ayoub on the list, thanking him "for his friendship and encouragement."

After Ayoub's retirement, Ayoub returned periodically. In May 2011, he returned to see Dave Machemer, manager of the new AA Richmond team. Machemer, a former player, played on a winter ball team in South America, one that Ayoub served on as trainer, The Times-Dispatch wrote.

That year in 2008, Ayoub, along with Garr and a long list of former Richmond Braves returned for the team's final game in the city. Each was introduced individually. After Ayoub was announced, along with his long record with the team, Ayoub walked onto the field to his share of cheers. The scene was captured in a YouTube video from the day, at the 1:50 mark.