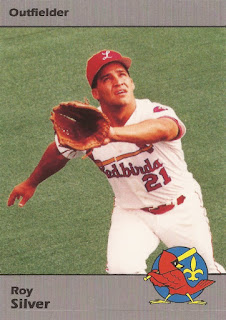 Between raking the infield and cleaning the toilets, the player listened.

In turn, Roy Silver, of The Winning Inning Baseball Academy in Clearwater, Fla., talked to the player about the possibilities, if only the player - Josh Hamilton - stayed clean, Silver recalled to The Associated Press in 2011.

It was Silver, a former player and coach in the Cardinals system, who reached out to Hamilton, as Hamilton made his early attempts to stay clean, and attempt his comeback from drug and alcohol addiction, according to The Sarasota Herald-Tribune.

From there, at Silver's baseball academy, Hamilton's slow progress back began.

Silver's own progress toward that point began as a player himself, signed by the Cardinals as an undrafted free agent out of Eckerd College, in St. Petersburg, Fla.

Silver, though, would never make the majors himself, playing from 1984 through 1991, but he would go on to mold them as a manager and coach in the minors, and with his baseball academy, co-owned with trainer Randy Holland.

Silver began his own career in rookie ball, at Johnson City. There, Silver hit .294, earning a trip to single-A Savannah for 1985. At single-A St. Petersburg in 1986, Silver hit .294. That September, Silver hit a playoff home run, the ball bouncing off the top of the wall.

Silver made AA Arkansas in 1987 and got a look at AAA Louisville in 1988. Two years later, Silver got 88 games at Louisville, hitting .248 with four home runs. His playing career, though, ended the next year, with 23 games at single-A Savannah.

His playing career over, Silver turned to coaching. By 1993, he was managing the Cardinals rookie league team in Arizona. In 1995 and 1996, he was at single-A Peoria.

"Baseball is a privilege," Silver told The Journal-Star then, according to a 2008 article. "Sports are a privilege. Nobody has to play sports. If people don't follow rules, you take the privilege away."

By 1998, Silver had opened The Winning Inning with Holland. One of their first students happened to be future Rookie of the Year Chris Coghlan, according to The Palm Beach Post.

With Coglan, too, Silver and Holland worked to help him through tough times. With Coghlan, though, it was the death of his father in a car accident 2001, The Post wrote.

Called by Coghlan's mother, the two dropped everything to go and see the young Coghlan. "There was a lot of anger, a lot of tears," Silver recalled to The Post in 2010.

It was in 2005 that Silver reached out to Hamlton, after he read a newspaper article where Hamilton asked for another opportunity and someone to talk to, The Herald-Tribune wrote.

Silver offered that, along with hard work both on the field and off it.

The Winning Inning has been described as Christian based. On its Web site, only an offered Bible study suggests that.

The site is likewise also modest about its most famous players, Hamilton and Coghlan. Both are listed in alumni under "other players," each with only a name and team. Hamilton is listed as third-to-last on that list and Coghlan second-to-last.

Hamilton, though, in his book Beyond Belief, is more direct about what Silver and co-owner of The Winning Inning, Holland, gave him.

"Without you guys, I would not be the man I am today," Hamilton wrote. "Thank you for all you have done for me."