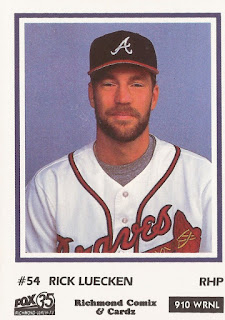 The Braves had just returned home from a West Coast swing and reliever Rick Luecken chose that as the time to go to manager Bobby Cox and question his role with the team, the story went, according to The Atlanta Journal-Constitution.

Those who over heard the ensuing 4 a.m. conversation remembered it as one-sided, according to the story relayed at a 2011 luncheon where Cox was inducted into the Braves Hall of Fame, according to The Journal-Constitution.

"You know what that [bullpen] phone rings and I tell you to warm up?" Cox was recalled as saying at the luncheon, according to The Journal-Constitution. "That’s your role."

Luecken had been with the Braves in Atlanta for much of the year, getting into 35 games to that point in early September. After that, though, he got just two more outings, the second after being picked up off waivers by the Blue Jays.

Luecken came back for just one more season, five outings played at AAA, and his nine-season pro career was done.

Luecken's career began in 1983, signed by the Mariners as a 27th-round pick out of Texas A&M University. For Luecken, his college time didn't improve his draft status. Out of Spring Woods High School in Texas, the Giants had taken him in the 1979 draft in the first round, 18th overall.

Luecken returned to Chattanooga for 1986. For 1987, though, he moved to the Royals system in a five-player deal.

Luecken stayed three seasons in the Royals system, making Kansas City for 19 outings in 1989. He went 2-1 for the Royals, with a 3.42 ERA. That December, Luecken made another move in a trade, arriving with the Braves.

"Luecken has developed into a good relief pitcher," Cox told The AP, "and has a definite chance to help us right away."

Luecken then made the Braves the next year, getting those 36 outings, putting up a 5.77 ERA. That September, less than two weeks after he met with Cox, Luecken was taken off waivers by the Blue Jays, pitching his final big league outing for them.

Five more outings with the Cubs at AAA Iowa in 1991 and Luecken's career was over, with 56 total outings in the majors over two seasons.