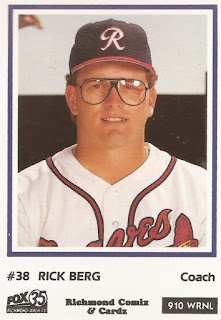 It's been more than 25 years since Rick Berg played at Missouri Southern State, but he's still in the school's record book.

Berg went on from Missouri Southern to play as a pro. His playing career, as well as a post-playing coaching career, were both brief.

Berg's pro career began in 1987, signed by the Braves as an undrafted free agent out of Missouri Southern.

Berg went to Missouri Southern out of Luther South High School in Illinois, according to his ProCards card. He won Athlete of the Year honors there in four sports, baseball, basketball, football and golf.

At Missouri Southern, he won All-Conference honors each of his four years, according to his card.

In 1990, Berg tried his hand at coaching. He served as a coach at AAA Richmond. It was the only season he's credited as a coach.