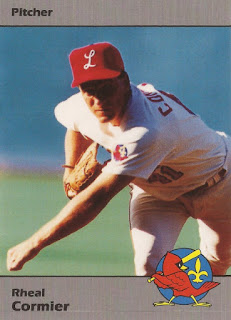 Rheal Cormier rejoined his native country's Olympic baseball team in 2008 - 20 years after he first played for the club, according to The Edmonton Journal.

In between the two Olympic runs for Canada, the native of Moncton, N.B., put together a 16-season career in the majors

"I'm just blessed to be a part of this team," Cormier told The Journal then, a year after he played his final game in the bigs. "I played 20 years ago. I had a great time then. Baseball is baseball, no matter what level you play at."

Cormier played at the highest level for five clubs over his career, beginning as a starter and ending as a reliever. He won 71 major league games and posted a career 4.03 ERA over 683 appearances, 108 starts.

Cormier's career began in 1988, taken by the Cardinals in the sixth round of the draft out of the Community College of Rhode Island. He played his high school ball in his native Canada, Moncton.

He started in 1989 at single-A St. Petersburg. He made AA Arkansas in 1990 and got a brief look at AAA Louisville. In August 1991, Cormier's third professional season, he made the majors.

Cormier got into 11 games for the Cardinals in 1991, starting 10. He went 4-5, with a 4.12 ERA. He got his second win in late August, going into the sixth before getting knocked out of the game by a line drive to his arm off Darryl Strawberry.

He returned to the Cardinals for 1992, but by mid-July had amassed just a 2-7 record. Cormier tried to think positive after his second win, according to The St. Louis Post-Dispatch.

"You can't let your record determine how you pitch," Cormier told The Post-Dispatch. "If you think about your record, you're probably going to mess up. If I keep pitching like I am, the results are going to change."

Cormier then returned to Canada, sent to Montreal in a trade. He went 7-10 his first year there and only got into a single game his second. He then didn't play at all in the majors in 1998.

"Rheal is very vital to us," Bowa told The Morning Call. "Big time. ... He has really been a bridge to the closer. What makes him extra valuable is he can work several innings because he gets right-handed batters out better than the lefties."

Cormier continued with the Phillies into 2006, when he moved to the Reds. He played his final big league games with Cincinnati in 2007.