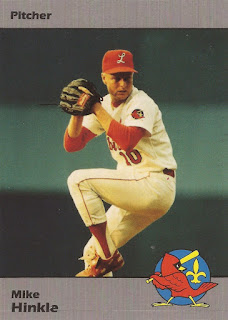 Mike Hinkle was honored in spring 1987 at Kansas State, picked as a member of the Big Eight all-academic team, called in one account "the baseball brain team."

Less than two months later, Hinkle would receive another honor, selected by the Cardinals in the 24th round of the draft.

Though he was honored both in college and in the draft, Hinkle would never get the honor of making the major leagues. His pro career lasted six seasons, getting hm to AAA for three of them, but no higher.

Hinkle was drafted by the Cardinals after a career at Kansas State where he threw two shutouts in 1987, still tied for the school record. He also won first team all-conference honors that year.

With the Cardinals, Hinkle started at short-season Erie, going 5-4 in 10 starts. He also posted a 2.34 ERA.

His 1991 season was a brief one, lasting just seven starts. Six of those were at Louisville, one back at single-A St. Petersburg.

By 1992, Hinkle was a reliever, getting 38 outings, three starts. It was his final year in affiliated ball. After that, Hinkle continued playing in Italy, but never made it to the majors.