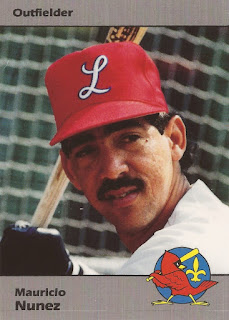 In his fifth season of pro ball in 1986, Maurico Nunez never lost sight of his homeland, the Dominican Republic. He returned there each winter after the season was out, The St. Petersburg Evening Independent wrote that July.

"I like playing ball, the guys and seeing different places," Nunez told The Evening Independent. "But my family is my home and they are in Santo Rodriguez."

Nunez spoke to The Evening Independent as a member of the single-A St. Petersburg Cardinals, a team he'd played with each of the two previous seasons and would return to for 1987.

The Dominican product would continue playing through 1991, finally making AA in 1988 and AAA in 1990. But Nunez' career would end without him making the majors.

Nunez' career began in 1982, signed by the Cardinals out of the Dominican Republic. He played that first season at rookie Johnson City. He hit just .165 in 60 games.

Back at Johnson City for 1983, Nunez did better, hitting .260, with eight home runs. He also earned a promotion to single-A St. Petersburg for 1984.

St. Petersburg, though, would become Nunez' home away from home for the next four summers. His best hitting year came in 1985, with a .290 average. The other three seasons, Nunez never hit higher than .258.

In June 1984, Nunez received praise for his defensive work. The outfielder threw out two runners at the plate in the final two innings to help St. Petersburg to a win.

Nunez got three hits in one July 1985 contest. He knocked in two on a triple that August. In late June 1986, though, Nunez picked up four hits in five at bats in one game. His final year, Nunez picked up 44 stolen bases.

In 1990, his final season as a full-time player, Nunez arrived at AAA Louisville. He hit .248 and stole only four bases. Nunez served as a player coach in 1991 at St. Petersburg, he also got six more games at Louisville, ending his playing career.