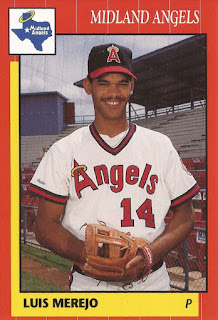 Luis Merejo applied a hard tag late in this July 1989 game and he instantly made an already odd game more notable, according to The Associated Press.

Earlier in the game against Wichita the umpire tossed the Midland announcer and then manager after the announcer played a mocking song off a controversial call.

Off Merejo's hard tag later in the game, a brawl ensued. Merejo and five others got ejected, The AP wrote.

Merejo applied that tag in his fourth season as a pro, and a season where he made the league all-star team. Merejo, however, got into one more season. He never made AAA.

Merejo's career began in 1986, taken by the Angels in the 18th round of the draft out of County College of Morris in New Jersey.

Merejo started with the Angels at short-season Salem. He picked up two wins in 20 relief outings, with a 2.21 ERA. He moved to single-A Quad City in 1987 and then high-A Palm Springs in 1988.

Merejo then made Midland for 1989. He earned a warning for both sides in a May game against Tulsa after he hit Sammy Sosa with a pitch. Overall, he got into 54 games, won five and had a 3.34 ERA.