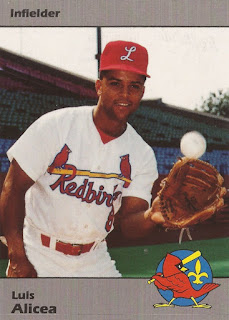 Luis Alicea made the Cardinals for the first time in 1988 and the infielder quickly showed what he could do in the field, he just had to work on his hitting, according to The St. Louis Post-Dispatch.

Alicia told The Post-Dispatch he just wanted to do the job the club needed him to do.

"Defensively, I feel like I'm playing well, that I'm doing the job," Alicea told The Post-Dispatch. "I'm either here to do one job (offense) or the other (defense), or hopefully both."

Alicea eventually did both well enough to see 13 major league seasons, playing for five different organizations. He didn't play his final game in the majors until 2002, with the Royals.

Alicea's career began in 1986, taken by the Cardinals in the first round of the draft out of Florida State University.

Alicea began with the Cardinals between short-season Erie and AA Arkansas. He then returned to Arkansas and saw AAA Louisville in 1987.

In June 1994, Alicea came through for the Cardinals as a pinch-hitter. His seventh-inning, pinch-hit home run led the Cardinals over the Phillies in a game that month.

"It was a high fastball," Alicea told The Associated Press afterward. "I sure wasn't thinking home runs. I was hoping to get the ball in the gap and just drive in runs."

He arrived with the Rangers for 1998 and stayed three seasons. In July 2000, Alicea came through with an 11th-inning triple for a win, two days after Alicea knocked in the game-winners in another contest.