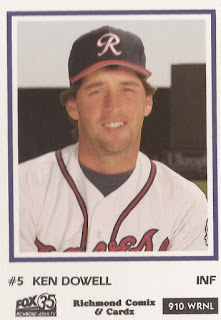 The South Atlantic League's Spartanburg Traders had just downed the Gastonia Cardinals 3-1. They did so on the back of shortstop Ken Dowell, whose a two-run home run ended up the difference that day, July 19, 1981.

"I'm not a home run hitter," Dowell told The Spartanburg Herald-Journal after the game. "That's my second of the year. But today I was hitting the ball well."

Dowell's bat was never the strong part of his game. It was always his glove, and it was his glove that he rode all the way to Philadelphia in 1987, playing 15 major league games.

Dowell signed with the Phillies after being taken in the third round of 1980's June draft. He had been taken by the Padres in the January edition of the draft, but didn't sign. One Padres official calling Dowell a "Pete Rose" type player, according to one account. In his first three years in the Phillies system, Dowell never hit higher than .227.

Still, going into 1983, Dowell was promoted to AA Reading, one of two shortstops to start with Reading that year. R-Phils manager Bill Dancy figured he could afford, according to the Reading Eagle, to have Dowell and his weak bat because he was so good in the field.

Dowell remained at AAA for 1987, and his bat picked up. By mid-June, Dowell was counted among the Maine Guides' hottest hitters with a 10-game hit streak, according to the Lewiston Daily Sun. He was also batting .305.

It was enough to earn Dowell a call-up to Philadelphia, playing in his first of 15 games June 24. He stayed with the big club through July 19, his bat returning to old form. In 39 official at bats, Dowell had only five hits, for a batting average of just .128.

Dowell hung on with the Phillies system through the end of the season. He was released in November 1987, signing later with the Mets. He played two seasons at AAA Tidewater before catching on with the Braves for 1990, his final year in pro ball.