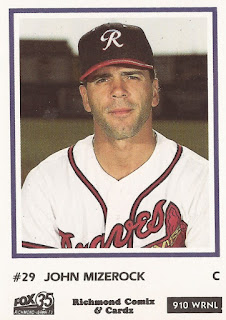 Mike Scott got his 10th win in 1985 and credited with helping the Astros to that win was Scott's catcher, John Mizerock.

In just his second game of the season, Mizerock hit a three-run double and later scored.

"Mizerock's double was really the big hit of the game," Scott told UPI afterward. "It broke it wide open."

Mizerock went on to hit three more doubles for the Astros in 15 appearances in 1985. He got only five others through his major league career, playing parts of four seasons and 103 total games in the bigs.

Since his professional career ended, Mizerock has gone on to a long managerial and coaching career, including one brief stint managing in the major leagues with the Royals.

Mizerock's career began in 1979, taken by the Astros in the first round, eighth overall, out of Punxatawnie High in Pennsylvania.

Mizerock started that year at single-A Daytona Beach, returning there for 1980. He hit .257 his first year and .211 his second, hitting five home runs between them. One of those home runs was a grand slam in August 1980.

In 1983, he hit major league Houston, debuting in April then coming back in June and in August. In August, Mizerock hit his first major league home run, along with his third major league double.

After 1986, Mizerock was released. For 1987, Mizerock signed with the Braves. He played that year and the next two at AAA Richmond. In 1989, the veteran catcher worked with young Braves pitcher Tommy Greene.

"He's got a little better curve this year," Mizerock told The Newport News Daily Press that April. "But the big thing is that he's making the pitch he has to with men on base now."

One more season in the Braves organization and Mizerock's playing career ended. By 1993, the former catcher was a manager, at short-season Eugene. As manager of Eugene, Mizerock told The Eugene Register-Guard his philosophy of winning.

"What you try to do is put everybody in a situation where they can be successful," Mizerock told The Register-Guard. "That's where you have your best chance to win."

When Royals manager Tony Muser was fired, Mizerock took over as manager for 17 total games.

"I'm a kid in a candy store now, however long it is, it's going to be great," Mizerock told The Associated Press after being named interim manager in late April. "I'm perfectly fine with the interim being in front of my name. I don't deserve anything other than that."

It also took him seven games to get his first win. Mizerock went on to return to coaching for the Royals, as a third base coach and bullpen coach. For 2011, Mizerock joined the Phillies as hitting coach at single-A Clearwater.