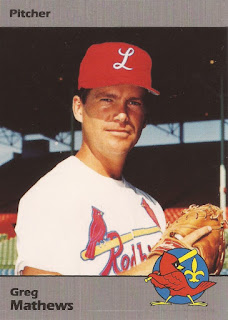 Greg Mathews picked up 11 wins for the Cardinals in each of his first two major league seasons. Perhaps the biggest win of his career came after his second campaign - an unexpected start for St. Louis in the 1987 NLCS.

"He only found out (Tuesday) about 4 o`clock he was going to pitch, and he worked two innings Sunday," Cardinals manager Whitey Herzog told reporters afterward. "Under the circumstances, for Greg to throw 101 pitches and get us into the eighth inning with the lead, he really helped our ballclub."

Mathews pitched once more in the NLCS and once in that year's World Series. He saw time in five major league seasons in all, injuries limiting his career.

Mathews' career started in 1984, taken by the Cardinals in the 10th round of the draft out of Cal State Fullerton.

Mathews played his first season between single-A Savannah, short-season Erie and rookie Johnson City. He moved up to AAA Louisville for half of 1985, then hit St. Louis in 1986.

He went 11-8 in his rookie campaign, with a 3.65 ERA over 22 starts. He picked up his final win in late-September against the Cubs after losing four decisions in a row, according to The Chicago Tribune. He went seven innings and allowed a single earned run.

"Today, the biggest adjustment I made was mentally," Mathews told The Tribune afterward. "I knew I was tired, I knew this was a long season, but mentally I was going to come out and make my pitches."

Mathews then went out and repeated his feat in 1987. He went 11-11, with a 3.73 ERA. After his success in Game 1 of the NLCS, writers focused on Mathews' quirks. The Los Angeles Times told a Mathews rental car story. The Times later called him a free-spirit, "the stereotype for kooky Californians."

"As a kid, I never dreamed about playing pro ball or anything like that," Mathews told The Times as he prepared to pitch in the World Series. "I've played since I was real little, but I never had an idol or anything like that. It's kind of funny that I'd make it when all those guys who tried their whole life didn't."