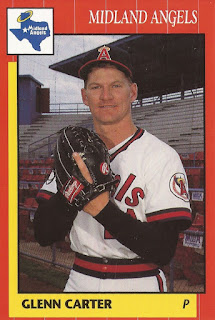 Playing in his eighth professional season in 1995, Glenn Carter still held out hope for making the majors, he told The New York Times that June.

Carter played six of those seasons at least partially at AA and one at AAA.

"I'm never going to give up," Carter told The Times. "It might come this year."

For Carter, though, the majors never came. That season also proved to be his last as a pro.

Carter's career began in 1988, taken by the Angels in the third round of the draft out of Triton College in Illinois.

Carter started with the Angels at short-season Bend. He went 3-4 over nine starts. He then moved to single-A Quad City and turned in a 15-9 record over 25 starts, with a 2.05 ERA. His season at Quad City earned him a Topps single-A all-star selection.

Carter spent that 1992 season at AA El Paso. He threw a complete game against Arkansas in May for his third win. He arrived with the Red Sox in mid-1993 and played at AA New Britain.