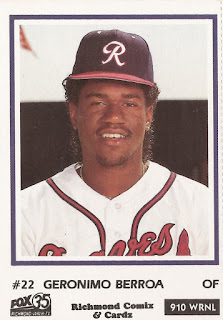 It was a season in which Geronimo Berroa hit the most home runs of his major league career, 36. It was also a season where Berroa got himself into the record books.

Berroa hit six of those home runs in just two separate games, three in each. He was the 10th player to hit three home runs in a game twice in a season, The Associated Press wrote.

Berroa's explanation was a simple one: "I just swing hard, that's all."

By the time his career was over, Berroa had hit a total of 101 in the majors, in a career that spanned parts of 11 seasons.

Also, years after his career was over, came accusations that those home runs were not natural. In a 2006 affidavit, unsealed in December 2007, disgraced pitcher Jason Grimsley accused Berroa, among others, of using steroids. A response from Berroa to the accusations, though, could not be found by The Greatest 21 Days.

Berroa's career began years before that big home run year. It began in 1983, signed by the Blue Jays out of his native Dominican Republic. He didn't make AA until 1987, hitting those 36 home runs at Knoxville. He'd hit 21 the previous year at single-A Ventura County.

He made AAA for the first time in 1988 at Syracuse, hitting .280, but only eight home runs. Taken by the Braves that winter in the Rule 5 draft, Berroa made the big league club out of spring training and stayed with them through the year.

Berroa got into 81 games that year for Atlanta, hitting .265, with just two home runs. Over the next four seasons, though, Berroa got into just 34 total major league games, for the Braves, Reds and Marlins. He didn't play in the majors at all in 1991.

"Who said that?" Berroa responded to that notion to The Times. "You see the ball good here."

By 1997, Berroa was seen as a piece the Orioles needed to make their run, traded there in late June. He also helped the Orioles to the playoffs and to the ALCS. In the clinching game of the ALDS, Berroa hit a home run off Randy Johnson.

"It's hard on any player to get traded in the middle of the season," Berroa told The Baltimore Sun after the Orioles won their spot in the ALCS. "But if I was still with Oakland, I'd be home [in the Dominican Republic] now. This sure beats that."

He played one final season in 2000 with the Dodgers, getting into only 22 games. He suffered a broken foot, fouling a ball off it. He never made it back.

Though a response to the steroid accusations couldn't be found, Berroa was out two months later, being honored for his play in the Caribbean Confederation Winter Leagues.

"This is such an honor to be here," Berroa told MLB.com. "I played hard every time I was out there and now I'm enjoying the fruits of my labor."