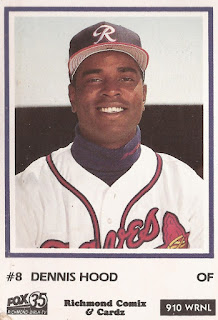 Dennis Hood made big league camp in spring 1987 - and the 40-man roster, according to The Sumter Item.

It was Hood's first taste of what it was like to be a major leaguer.

"It's just unreal," Hood told The Sumter Item of the experience. "I love it. I learned a lot just from being around the big guys. It's just great. It's glamorous up there."

For Hood, though, the taste of major league life would have to be limited to the spring. In a career that spanned more than a decade in affiliated and unaffiliated ball, he made it to AAA, but never made it to the majors.

Hood's career began in 1984, taken by the Braves in the 12th round, out of Muir High School in California.

He played his first two seasons in rookie ball, in the Gulf Coast League. He hit .200 his first year and .240 his second.

Hood made single-A Sumter in 1986. He hit .253 on the year, with seven home runs. He also made the South Atlantic League All-Star team. But he also struck out 146 times, an issue he admitted to The Item that May.

"My biggest problem is that I'm not patient enough at the plate," Hood told The Item. "I swing at too many bad pitches. I don't have enough walks and I have too many strike outs."

Hood first made AA in 1988 at Greenville, hitting .257 and still striking out 139 times. He made AAA for the first time in 1990, at Richmond. He played the year there, without getting a call up to Atlanta.

Hood isn't recorded as playing in 1992, but he came back in independent ball for 1993, with Thunder Bay in the Northern League. He hit Regina in 1994, along with two games at AAA Rochester with the Orioles.

He came back for 1995, playing eight games at AA Canton-Akron. He's last recorded as playing in 1996 in the independent Big South League.