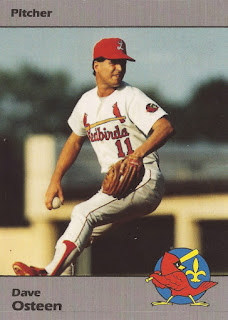 Dave Osteen came in for spring training early in 1988. A local high school pitcher in Melbourne, Fla. was the beneficiary, The Orlando Sentinel wrote.

''He was watching me on the side one day, and he asked me what type of pitches I threw,'' Havens told The Sentinel. ''I told him a fastball and a curve, and he asked if I wanted to learn how to throw the change. I had learned how to throw different changeups but not with control. But I worked with him, and after a while it came pretty natural.''

Osteen, going into his third professional season, taught the high school pitcher having learned much from another pitcher, his father Claude Osteen.

Following them both would be Osteen's younger brother Gavin Osteen, who himself went on to a long playing career, but also couldn't crack the majors.

Dave Osteen's professional career began in 1986 with the Cardinals at rookie-league Johnson City. He started off well, going 9-2 with a 2.26 ERA.

For 1991, Osteen moved to mainly relief, playing at AAA Louisville. His ERA ballooned to 6.41. It was his final year playing.

Osteen went on to coach for several years. In 1996 and 1997, he was with the Dodgers at short-season Yakima. He also coached in the Australian Baseball League, with the Bridgeport Bluefish of the independent Atlantic League and at Gulf Coast Community College in Florida.

With the Bluefish in 1999, Osteen was credited with helping veteran pitcher Al Sontag with his delivery, resulting in a Sontag complete-game win.

"Dave noticed something in my mechanics where I was rushing to the plate and needed to sit back a little longer so there was more pause in my windup," Sontag told The Norwalk Hour, "That's really proven to be the key."

In 2000, he was named Purdue's pitching coach. By 2002, he was back in the pros, serving as coach with the Brewers at High Desert, his last recorded coaching stint. Coming to Purdue, head coach Doug Schreiber praised Osteen.

"Dave has tremendous experience and is very knowledgeable," Schreiber said upon the hire, "not only from a pitching standpoint, but in the entire game of baseball."