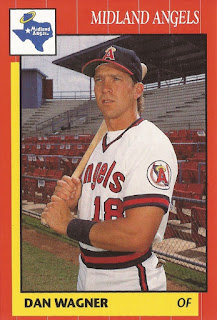 Dan Wagner helped pull the AA Birmingham Barons even in this July 1988 game, according to The Associated Press.

He did so by hitting a home run in a six-run fifth inning, in a game Birmingham went on to win 14-10, The AP wrote.

Wagner hit that home run in his third season as a pro, his first at AA. He moved on the next year to get time at AAA Vancouver. Wagner, however, never made the majors.

Wagner's pro career began in 1986, taken by the White Sox in the 16th round of the draft out of Tulane University.

Wagner started with the White Sox at single-A Appleton and in the rookie Gulf Coast League. He hit .248 in 72 games, with 30 RBI.

Wagner split 1988 between single-A Tampa and Birmingham, then played all of 1989 at Birmingham. He singled in a run in a May 1989 game, then scored after reaching on an error in a June contest.